The new ESRI UK Education Team resources for teaching about the Climate Emergency have now been released and are ready for use. They explore climate change in the UK, and were produced in partnership with the Met Office. 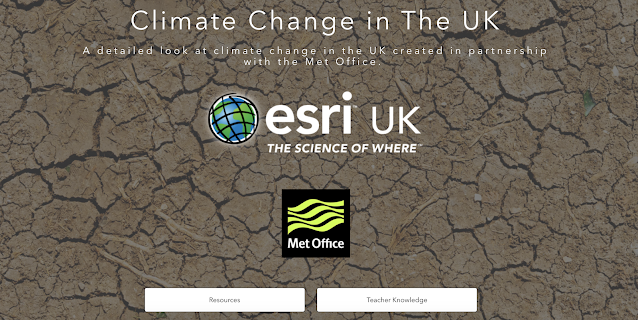 They include Teaching Resources for different key stages including Primary.

They also include a Teacher Knowledge section.
This includes the useful resource on COP26 below.
A typically stylish and useful set of resources generously shared.

Posted by Alan Parkinson at 5:07 PM No comments:

This is a collection of ESRI StoryMaps which has been published ahead of World GIS Day.

It's called the Human Reach Atlas.

Posted by Alan Parkinson at 9:23 AM No comments:

Excellent work by Alistair Hamill and others, which has been shared by Jason Sawle and the ESRI team.
Posted by Alan Parkinson at 6:46 PM No comments:

Remember to use the ArcGIS Living Atlas.

Posted by Alan Parkinson at 2:34 PM No comments:

A new guide to using and creating ArcGIS StoryMaps from ESRI has been made available. It's been updated and is very clear. 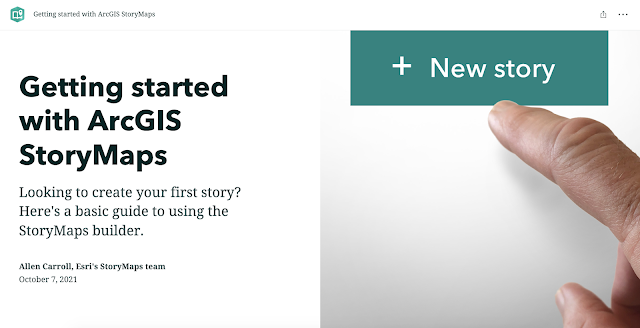 Posted by Alan Parkinson at 11:12 AM No comments:

Thanks to Geofolio for an opportunity to explore your area and generate loads of information automatically.

Define an area of interest anywhere in the world, and we'll automagically create thematic factsheets containing interactive maps, charts, written overviews, and statistical summaries – all based on open geodata. 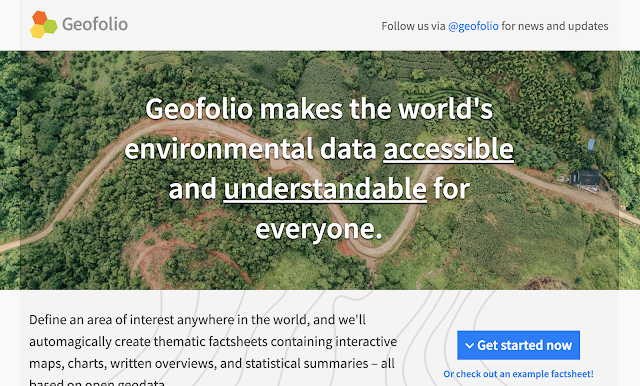 I had a play of course. I went to North Norfolk, where colleagues took part in 2 days of coastal fieldwork earlier in the week. What would the site tell me about this location? 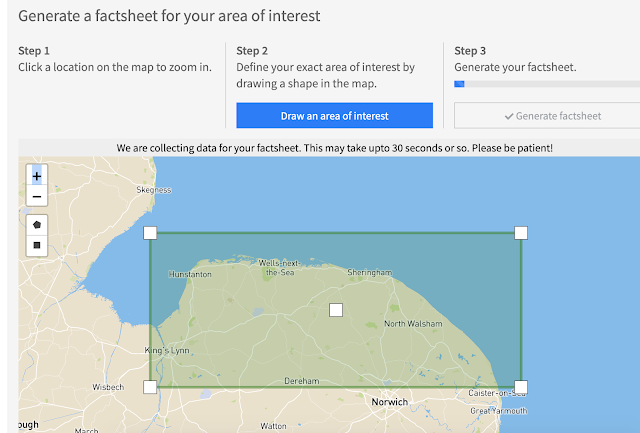 Here's the report that was generated...
Geofolio North Norfolk from GeoBlogs

It was a tipoff via Richard Allaway.

This has great potential for generating secondary data about locations.

Posted by Alan Parkinson at 6:06 PM No comments:

A raindrop's journey to the sea

This is a rather fine map tool / experiment / visualisation.

It is called River Runner, and will allow you to follow the route taken by a rainfrop.

Make your raindrop fall anywhere within the contiguous United States and the website will work out the route it will take to the sea and the tributaries and rivers it will flow through. It will then take you along that route.

It's really rather good visually, and I am assume is also accurate.

Check out Sam Learner's other map projects.
Posted by Alan Parkinson at 9:25 PM No comments:

Some elements of this story have been around for a while.... 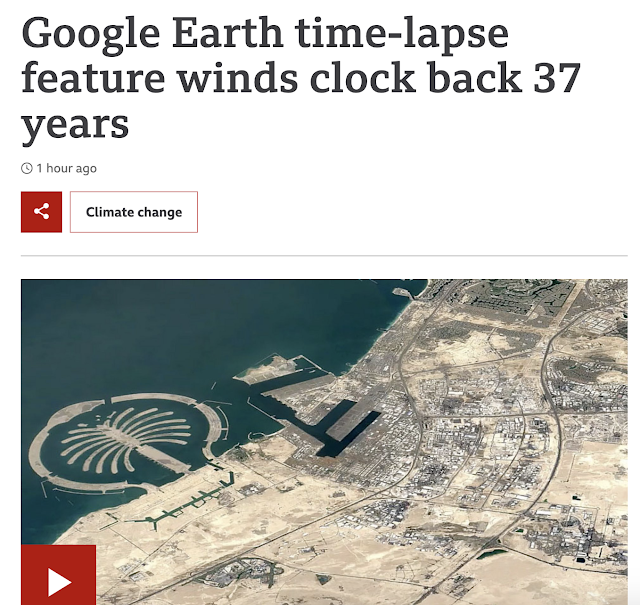 Posted by Alan Parkinson at 3:27 PM No comments:

A well deserved step up for Jason, who I have known for quite a while now, and who has always been helpful and supportive... we ran joint courses for a while about 10 years ago when I was working for the GA. Follow Jason on Twitter to see where he goes next....

ESRI's tools have come a long way, and are now free for most and increasingly powerful and flexible.

Some personal news. Yesterday was my last day as Head of Education at @esriuk as I have moved to a new role with @Esri to be the Global Manager for Schools.
A big thank you to @geogologue and @GIS4HE for being great team mates and committed fancy dress collaborators😀! pic.twitter.com/EA2A18dEjU

Posted by Alan Parkinson at 5:29 PM No comments:

A small milestone perhaps, compared to the 10 000+ posts over on LivingGeography, but passed 500 posts on this blog, which has actually been around for quite a while, in fact predating LivingGeography. The blog began as part of a project funded by the Royal Geographical Society's Innovative Geography Teaching grants - I've received quite a few of them over the years.

It has broadened beyond Google Earth to take in Digimap for Schools and then ESRI's ArcGIS Online and StoryMaps.

Meanwhile Google Earth has changed, moving to the PRO download, which is still my preferred format, and now the Chrome browser version with its Projects builder option....

Posted by Alan Parkinson at 5:26 PM No comments:

This has appeared today and been mentioned on the BBC News site. 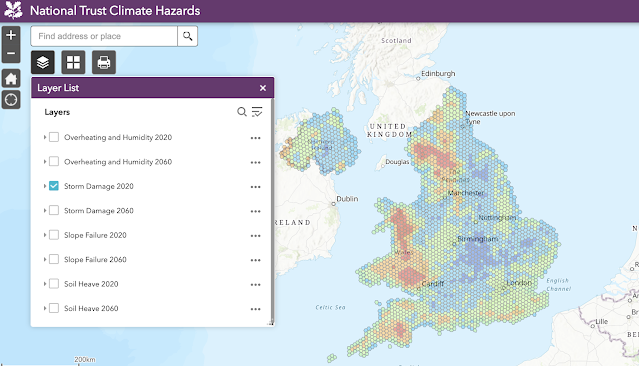 National Trust director for land and nature Harry Bowell said: "This map is a game-changer in how we face the threat climate change poses to the places we care for.

"While the data draws on a worst-case scenario, the map paints a stark picture of what we have to prepare for. But by acting now, and working with nature, we can adapt to many of these risks."

The charity says staff are already taking action to cope with rising temperatures:

Heat-tolerant plants are being grown at Ham House in London, which the map warns could often face 40C (104F) heat by 2040
At Lyme Park in Cheshire, which was hit by a major flood in 2019, trees are being planted on moorland to slow the flow of water and reduce flooding risks
At Mount Stewart in County Down, where rising sea levels have contributed to coastal erosion, a shelter against incoming water has been made
At Malham Tarn, in the Yorkshire Dales, where a 18th-Century barn collapsed due to soil shrinkage, teams will plant trees and use specific plants to manage the water table

The map plots the impacts of extreme heat and humidity, landslides, coastal erosion, shrinking and shifting ground due to wet and dry conditions known as "soil heave", and high winds, in 2020 and 2060.
Take a look and see how your own home area fares.
Posted by Alan Parkinson at 3:54 PM No comments:

Thought for the Day

“A map is the greatest of all epic poems. Its lines and colors show the realization of great dreams.” Gilbert H. Grosvenor
Posted by Alan Parkinson at 11:55 AM No comments:

A map which shows a terrible toll...

Hardly any part of the country has remained untouched by the pandemic...

The latest interactive map from the ONS.

Posted by Alan Parkinson at 2:50 PM No comments:

Time to sign up for the Great British and Irish River Managment GIS Initiative, being organised by Alistair Hamill, Brendan Conway and Andy Funnell.

Get more of a sense of the Great British and Irish River Managment GIS Initiative in this video. These are the citizen scientists across these islands who have signed up so far.

The local walk has been the lifeline for so many of us over the past year. The chance to get away from the desk and from the computer screen; the chance to get out and feel the wind against your back and the warmth of the sunlight on your face (or, perhaps, if you live in N. Ireland, yet more rain driving into your face!)

And, perhaps, during your local walks you have come to know your local area a bit more. Perhaps you’ve ventured down pathways or streets you don’t normally walk; perhaps you’ve come to appreciate that little bit more that place we call our community.

Maybe, like me, you’ve spent more time exploring your local river, getting to know all its twists and turns, watching it respond to the changing weather patterns. Perhaps you have come to appreciate it even more too.

If so, then the Great British & Irish River Management GIS Initiative might be just for you.

The idea behind this is to pool the resources of geography teachers and other interested parties in a kind of ‘citizen science’ data capture of river management across these islands. Not in some theoretical way – but in the way it happens on the river beside us, the river we have local knowledge and experience of. River management as it actually happens, warts and all. So we’re interested in the small scale stretch of river beside you; the kilometre or three that you walk along, that you know and love well.

We will use GIS to collect and collate the information. All it will take is for you to collect data with your phone and you will be supported into how to bring this into the wonderful world of GIS. Don’t worry if you haven’t much experience in using GIS so far. The skills you will need for this are very accessible and you will be supported in developing them.
SIGN UP HERE.
Posted by Alan Parkinson at 11:35 AM No comments:

I first came across this game in July 2020 when it was on early access on Steam, and sadly not available for iOS. I coveted it. It's created by Oscar Stålberg.

I downloaded it a couple of months ago, and have finally had a few hours to get to play with it, and it's excellent and very calming. 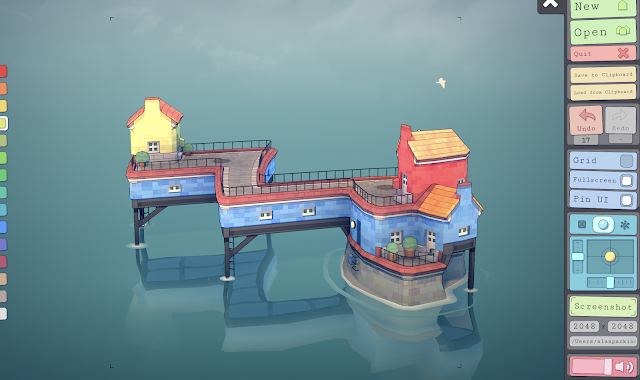 I shall probably be posting numerous screenshots in different locations over the next few days. 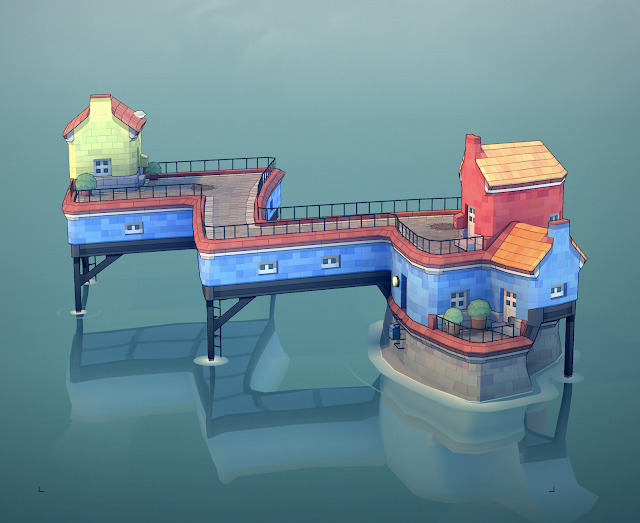 There's a GUIDE here, although you can start playing immediately by choosing a colour, scrolling around the existing town and then clicking in different directions. I love watching the seagulls circling and settling on the rooves as well. 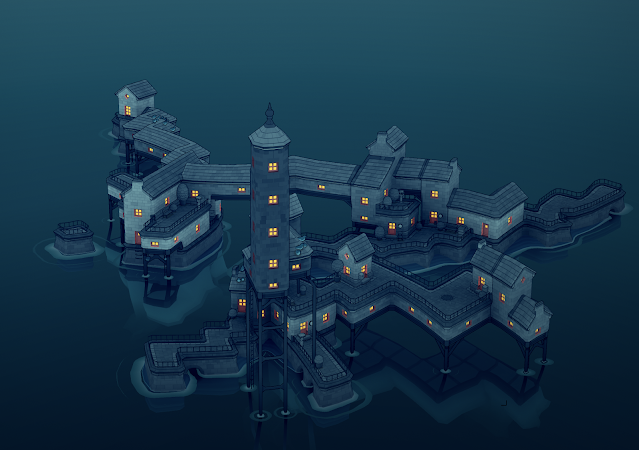 Here's the description on Steam. It currently costs £4.79

No goal. No real gameplay. Just plenty of building and plenty of beauty. That's it.

Townscaper is an experimental passion project. More of a toy than a game. Pick colors from the palette, plop down colored blocks of house on the irregular grid, and watch Townscaper's underlying algorithm automatically turn those blocks into cute little houses, arches, stairways, bridges and lush backyards, depending on their configuration. Post settings Labels Urban,Townscaper,Games Based Learning,Games,Cities, No matching suggestions Published on 19/02/2021 12:38 Permalink Location Options Post: Edit
Posted by Alan Parkinson at 11:34 AM No comments:

Support this blog by shopping for OS maps using this link

Welcome to this Blog

This blog started back in 2006, and the first few posts act as an archive of all the slides and materials I used at the SAGT Conference in October of that year. It has since grown to incorporate weblinks taken from GeographyPages and other sources, as well as a range of ideas, tools, plugins, technology and other things related to Google Earth / Maps / SketchUp etc..
It also offers a range of tips for ArcGIS Online as this is replacing Google Earth as the free 'GIS' tool of choice in a lot of schools, and Digimap for Schools as the subscription service of choice.
Thanks for visiting. Follow the blog by entering your e-mail... 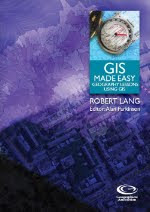 From the GA shop - ICT toolkit 1 - written by Bob Lang, edited by ME 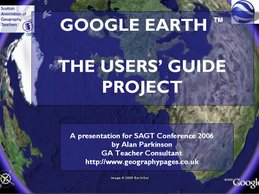